I’m a little late with this update because I have been celebrating my birthday for the past week.

I finally did a group run!!!

Over the past few months (well years), I have been saying that I wanted to get involved

with a running group or club. Well, technically, I am a member of two running groups – the Front Runners of NY and Harlem Run, but I’ve never run with either. The funny thing is that Harlem Run meets in a park that is literally a 3-min walk from my apartment. Actually, it’s a 2-min walk, if the light is green. I did enjoy running with the group. However, I did not hang out for the post-run meet and greet because the hubby made dinner. It’s kind of funny because the post-run meet and greet is held at Harlem Shake – a burger/shake joint. Actually, I used to do group runs with a group that finished their runs at local bars so I cannot really judge.

Since I would like to drop 20ish pounds by October, I have been hitting the gym and watching what I eat.

Here’s goes my week of “training”

Ran 4 miles with Harlem Run. Since I was new to the group and was a little tired, I ran in the 10min/mi group, but it felt like we were running way faster than that pace. One issue I may have running with this group is that I’m not a huge fan of running after work; the group meets at 7 pm. I think going forward that I will have to change into my running clothes at work around 5:30/6 pm so I will be mentally prepared to run at 7 pm. It was kind of tough having the mental strength/desire to go home to drop off my work stuff, change, then meet the group. Technically, there is a drop off at Harlem Shake but I really do not want to leave my work stuff in an unlocked/unsupervised area.

Interestingly, our run literally took us to my office’s building. Talk about deja vu. 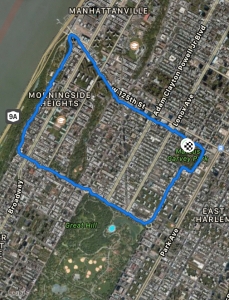 I was thinking that it was going to be a nice, easy run but our route had a tough hill one mile into the run.

After that hill, no one was really chatting that much. However, I did manage to talk to a few people during the beginning and end of the run. Most were nice, but there were a couple of non-social folks. Eh, can’t win them all.

X-training and a shit ton of stretching

A “fast” two-miler on the treadmill and 30 min of the stair climber.

I also did a Zumba class with one of my favorite instructors. I guess that it has been a few weeks since my last Zumba class. I dunno. I just was not feeling Zumba for a while. This class was kind of awesome because I liked ALL of the songs from the instructor’s playlist. I know that these types of classes are not about perfecting your dance skills. That said, why do I ALWAYS end up next to or behind the most uncoordinated person in the class?

I was supposed to do a loop around Central Park after picking up my contact lenses, but I went draaaankin’ instead. Speaking of contact lenses, I am so glad that I’m wearing them again for my physical activities. Although I liked wearing my glasses for the past month, I definitely prefer contacts . . . No question about it.

Unfortunately, my post-drinking, bad eating habit reared its head because I ended up getting fried chicken and fries for dinner. In my weak defense, I did have a small breakfast (a Diet Coke) and I skipped lunch.

Was the first day of my staycation. The plan was to go to the beach in the morning, but the rainy weather said otherwise. I did want to hit the gym and go for a run, but I ordered Ramen and became too full to run. A few hours later, I was going to do a loop in Central Park, but I saw that my phone’s battery was at 19%. Y’all know that I cannot run without music. Maybe I should start incorporating “silent” runs when I start training for the NYC marathon.